For those trying (and failing) to download radio programmes via get_iplayer, Peter has very kindly responded with a solution here.

Starting 30th Oct 2014, the BBC removed the previous way they published iPlayer RSS and Feeds to make way for a new API called Nitro – and it has broken a lot of third party apps (including the iPlayer plugin for XBMC). This has naturally caused a LOT of upset.

The good news, is that the folk over at Square Penguin seem to have managed a workaround and have now released an update: V2.90

Presume that you want to record “Rule Britannia! Music, Mischief and Morals in the 18th Century:

Copy (CTRL-C) the iplayer programme URL (ringed in red) which is: http://www.bbc.co.uk/iplayer/episode/b041m4rl/rule-britannia-music-mischief-and-morals-in-the-18th-century-episode-3 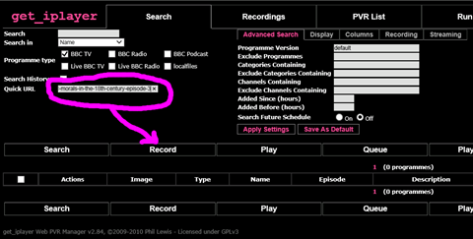 Once the download is complete, RIGHT CLICK on the file in Windows Explorer and select Properties (should be right at the bottom of the drop-down box that appears).

Click on the Details tab and click in the title box to edit it to be the name of the downloaded programme. This will enable it to show up with the correct name in whichever video player you use.