©Woody – please link to this page only – as no part to be reproduced without permission of the author.

I guess that I am one of the first folk in the UK to have purchased an Acer Aspire Revo R3700 from Ebuyer. Ebuyer say that it is “exclusive” to them – but I suspect that is “exclusive” because the spec of the PC they sell, differs from the US spec in that it has a 160GB HD (as opposed to 250GB on the US version) and comes with Limpus Linux pre-loaded (more on that later). Otherwise this is the standard Revo 3700 with the new ION2 graphics, 2GB of DDR3 and an Intel Atom D525 running at 1.8GHz.

What does it look like – and what do you get in the box?

Visually, the main unit is quite stunning in a very glossy piano

black – the same sort of finish as Samsung/LG TV’s – so this wouldn’t look out of place beside one. Handy if you were thinking of using it as a Media Centre PC – which I guess a lot of folk will buy it for. In fact, given that it has optical sound out (SPDIF) – this makes it even more suitable for those who would plumb the pure digital output into an AV amplifier to go for the full Dolby surround sound etc.

(The only problem is, that as you can see, the SPDIF is on the front of the unit – rather than the rear – Doh!). Video output is also catered for with a standard VGA socket and HDMI.

Note also, the Multi card reader handily positioned on the front of the unit (where you need it) which supports MultiMediaCard (MMC), Secure Digital (SD) Card, xD-Picture Card and Memory Stick.

Included in the box (and very well packed and sealed to avoid scratches) is a matching keyboard and optical mouse and a VESA bracket that will allow you to mount the Revo onto the rear of Monitors and TV’s  – which have the necessary fitting (most modern models come with this these days).

At first, the keyboard does seem a  bit of a disappointment. It is quite thin and light – and a lot smaller than it would appear from photographs. The keys also look like a luxury version of what you would find on the Sinclair ZX Spectrum (that dates me ….).

However, when actually being used, I found nothing to complain about. I guess that if you are a touch typist (I am not) or are writing a book, then you might want something more upmarket – but it does the job.

Included in the box is a small laptop like external power brick and some paperwork/manuals – but I didn’t read them – who does?

On first power up of the Revo, you can access the BIOS by hitting 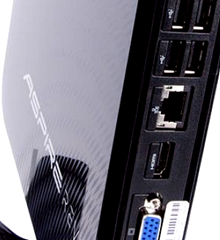 the Delete button – and F12 changes the boot order. All standard fare – and nothing worth mentioning. I did have a stroll through the BIOS, but found nothing worth tweaking (I have seen discussions that similar models have a BIOS setting that allows you to change the amount of memory reserved for the Graphics – but I couldn’t find it).

As I mentioned previously, this Revo comes pre-loaded with an Acer configured version of Linpus Linux. The less said about that, the better …. I did give it a whirl, but as it lacked any capability (that I could find) to change the screen resolution from a default 800 x 600, I gave up on it. Yes, there is a resolution changing applet – but it did zip. If you have a beard (that you take to stroking) I guess you might linger longer over this challenge, but I have a life – and more importantly, an impatient Mother – for whom this PC is ultimately destined as a general purpose Silver Surfing board….

To cut a long story short, I loaded up as little as possible to make this a working PC  and the least likely to confuse (my Mum). So, I installed Windows 7 Ultimate X64 (yes, I know it is a bit over the top, but I already had a copy and who knows, one day we might take it up to 4GB – so might as well future proof).

After running all the Windows updates, I could see that some of

the drivers remained as default – standard VGA drivers instead of ION2 for example. I guess that it would have plug-and-play updated by itself at some stage, but I was too eager to get the ball rolling. Acer publish updated Windows 7 drivers for the Revo 3700, but on checking, Windows Update had even later drivers, so I selected each item in Device Manager and just told it to update online from Windows Update. This included the Wireless LAN – which seems particularly sensitive – pulling in BTFon from neighbours some way down the road

On top of all that I put Avast (the free version), Office 2010 professional, Live Essentials 2011, MyDefrag 4.3, Process Explorer, PDF-Xchange Lite, FireFox 3.6, IE9 Preview 7, Adobe FlashPlayer (in order to run BBC iPlayer) and AutoRuns – the later turned out to be particularly useful in that I was able to spot that one of the above had silently installed the Ask toolbar – grrrrrrr.

How did it all go?

Like the clappers. It took everything I could throw at it in it’s stride and I never felt that I had an underpowered PC – quite the opposite. CPU use seemed to amble along at less than 20% utilisation most of the time – in fact, it spent most of its time in single figures. The detailed performance data follows at the end, but it is worth mentioning that I downloaded some 1080P AVI’s from the HighDef Forum and they played in Windows Media Player 12 without missing a frame (as far as I could see) and at no 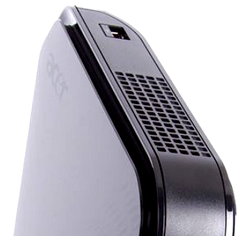 increase in overall CPU usage – testament to the CUDA offloading to the ION2 GPU (this means that the ION Graphics chip was doing the processing instead of the Atom CPU).

Oh – and although it has a fan – which vents through vents on the top – I never heard it once.

The keyboard is a bit tacky, but otherwise this is a very nice and nippy PC – which I would be more than happy to use on a daily basis or as a dedicated Media Centre.

Video Kaleidoscope – (Pyramid wheel and Aura) – Woody (what else?) 11FPS

This is a (very geeky) gem that you won’t find anywhere else – it took me long enough to work it out!

If you are reading this, it is probably because you have an Nvidia GeForce FX 5200 or FX 5 series video card in a Media Centre/Center (MCE) that is not properly driving your TV via the tv-out (svideo) connector. In Vista and Windows 7, the default driver automatically provided by Windows Update is the Vista driver version 96.85.

96.85 in Vista and Windows 7 works fine with FX 5 series cards – except for tv-out, which for some reason it drives at 25Hz. I can find no way to change the output frequency (which is possibly something to do with trying to give smoother, more fluid motion to DVD’s encoded at 24fps – but just makes the screen flicker for normal TV – particularly badly if you are watching in PAL) and the FX 5 series cards are now end-of-life with Nvidia no longer supporting them or releasing drivers that provide support.

However, there is a solution that works a treat! Download the XP driver 81.98 – it has to specifically be this one as I have found the flickering problem to exist in other XP drivers before and after this particular version.

STOP: This driver won’t install in Windows 7 or Vista as it is. Download the driver – 81.98_forceware_winxp2k_international_whql.exe and right click –> properties –> Compatibility and check “run this program in compatibility mode for Windows XP (Service Pack 3)” – and you are good to go.

Note: That this 81.98 XP driver does correctly drive Aero capabilities – although doesn’t show up as so hot in performance tests – but it is a Media Centre and not an XBOX – right?

The really cool thing about Windows Media Centre (to be found already installed in most versions of Vista and Windows) is that it is a central repository of all, well, your media. The problem is, that if you like using the BBC iPlayer, you effectively have to minimise the MCE interface and fire up a browser in which to watch iPlayer re-runs. Wouldn’t it be great if you could get iPlayer to run within MCE? Well, now you can.

While there has always been the Milliesoft MCE iPlayer add-on, I could never get it to work properly – and it was pretty resource hungry on my low power MCE (which also has a low bandwidth broadband connection).

So, step forward the gobsmakingly good mce-media-core. This really is an absolute gem – and probably the best add-on/plugin I have ever seen for MCE. What’s more, it doesn’t use Flash but wmv streams. As a consequence, you have to wait a minute or two for it to initially buffer, but once running, the video is broadcast quality – with no stuttering (like you can have with CPU intensive Flash rendering).

mce-media-core is still very much at the alpha phase, so some features don’t work (yet). I can’t get it to play BBC HD streams and there is no fast-forward or rewind – but I am sure that will be fixed as the product matures – unless Microsoft offers the author a job (and they really should).